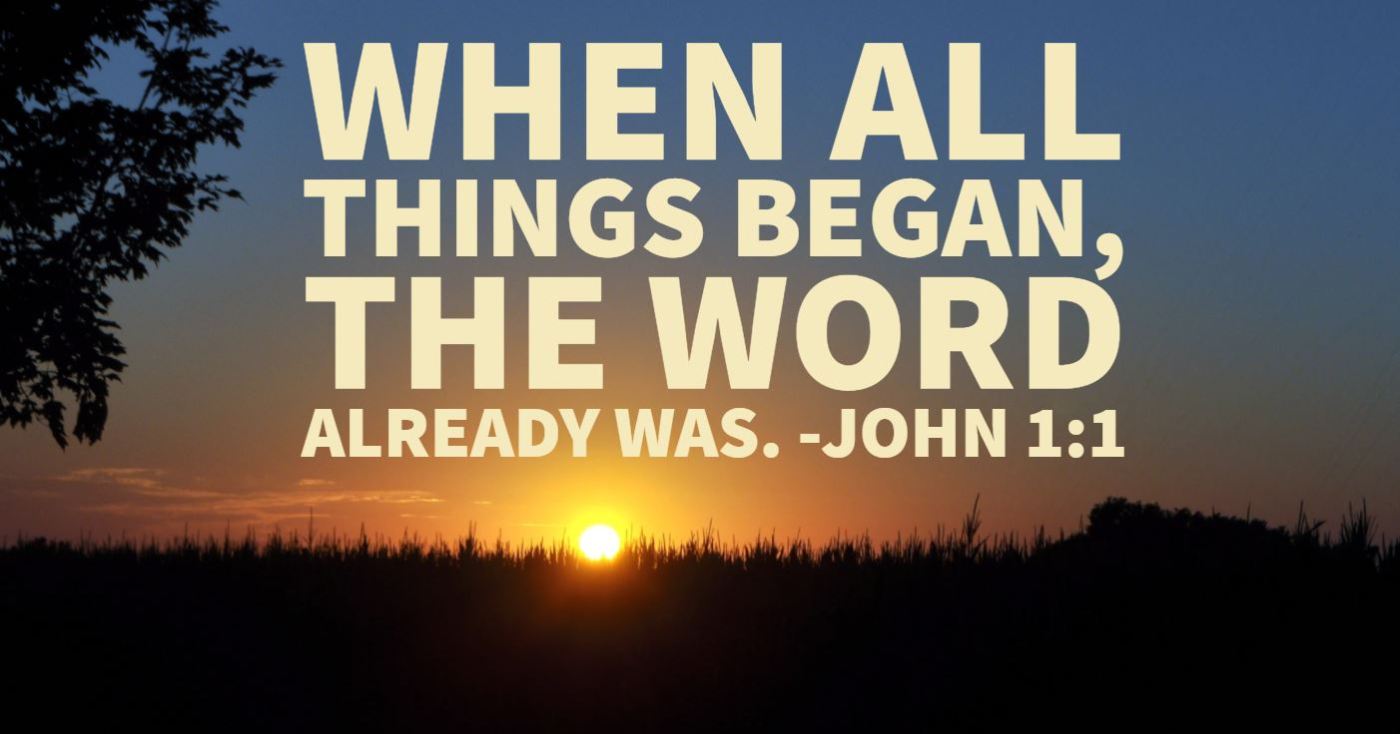 Last week I shared that I had read all four Gospels (God Does So Much And Asks So Little) and that I, despite procrastinating, was preparing to write an 1800-word paper responding to this prompt:  Explain the story of the life of Jesus as portrayed in the Gospel of John, and compare it to either Matthew or Luke and how this might relate to ministry today.

A few of you asked to read the paper…and now that it is graded (94%), I feel confident enough to share the-just-shy-of-1800-words that I wrote.  I would love to hear what you think, whether you have ever read all four Gospels in their entirety, and what resonates most with your spirituality.

Each of the Gospels contributes to an understanding of who Jesus is. The Gospel of Luke shares Jesus as bringing a universal faith under the direction of the Spirit; John focuses on the power and divinity of Jesus to confer salvation and immortality (Harris 110, 189). The themes, characters, teachings and post-resurrection interpretations for each of the gospels support these unique aspects of Jesus. The relationship between John and Luke could be stated: the Johannine Jesus shows who God is while Luke shows people how to be God-like in their lives.

The Gospel of John, written between 90-100 CE, is a cosmic and theological, rather than historical, representation of Jesus (Harris 249-250). John portrays Jesus as the incarnation of divine Wisdom, born to overcome darkness, evil and chaos, bring light into the world and offer salvation (Brubacher, Jesus; Harris 250, 259). Exclusive to John, Jesus is revealed as the Word, or Logos translated in Greek, “When all things began, the Word already was. The Word dwelt with God, and what God was, the Word was. (John 1:1)” Jesus pre-existed, “In the beginning God created heaven and earth (Gen 1:1, Harris 259).” The Wisdom tradition united with Greek philosophy places Jesus existing, in cosmic order, at the beginning of the universe, cooperating with Yahweh before his incarnation (Harris 249, 259).

Greek and Jewish Wisdom literature, the hypothetical Signs Gospel, and oral teachings of the “Beloved Disciple” were sources that “John”, likely anonymous, used to reach a broad audience. Because of tension between Torah loyalists and Jesus followers, Christians were excluded from synagogues; for Christianity to be a sustainable religion, casting a wider evangelical net was imperative (Harris 250, 253). John also confronted the disappointment of Jesus’ original followers when an imminently predicted second-coming was not realized and to provide encouragement for believers who hoped a Messiah would save them from hardships (Brubacher, Jesus; Harris 250).

Ninety percent of John’s content is not in other gospels (Harris 113). Divided into two sections—the Book of Signs, seven miracles of Jesus; the Book of Glory, Jesus’ death as glorious, fulfillment of divine will, its Christology states Jesus and the Holy Spirit are one; after Jesus’ death and resurrection, the Holy Spirit takes his place (14:26). Jesus proclaims, “I am the bread of life (6:35), the good shepherd (10:11), the resurrection and the life (11:25), the way, the truth and the life (14:6, Harris 260-262).”  Jesus, with authority and “equality with God” gives a new commandment to love one another (13:34-3). Jesus’ dying on the cross demonstrates the ultimate act of love.

The Synoptic Gospels, narratives of the life, death, and resurrection of Jesus, focus on Torah reinterpretation (Harris 249). The Gospel of Luke, specifically, was written around 85-90 CE (Harris 192). Luke, “the beloved physician”, did not know Jesus and is likely anonymous.  Luke’s goal was to write a well-researched gospel, “going over the whole course of these events in detail (1:1-4).” Luke was written to convince Jews and Gentiles to believe in Jesus as universal savior, a familiar role appropriated to gods and human rulers (Harris 190-191).  Luke’s message is intended to guide all—men, women, rich, poor, and especially those disadvantaged—to salvation (Brubacher, Jesus).  Luke’s gospel, most inclusive to women,  gives prominent “roles” to Jesus’ mother, Mary, who proclaimed the Magnificat (1:46-55) and was with Jesus at his death (Harris 196, 270). In the story of Mary and Martha, Mary was encouraged to equally participate with men listening to Jesus’ teaching (Harris 206). And Mary Magdalene alone discovers the empty tomb upon Jesus’ resurrection (Harris 270). The Lukan Jesus is concerned with social and economic justice, for the poor, social outcasts and women (Harris 193).

Luke provides a “connected narrative” of events in Jesus’ life, fulfilling prophecies in Hebrew scripture, securing a role in salvation history for Israelites, and revealing a new covenant to Gentiles (Harris 190, 201). Jesus as Son of Man is Messiah for Jews and Savior for all (9:22), forgives sins (5:24), must suffer (19:20), die and be judge of all (Harris 198, 201).  Luke uses the Hebrew Bible, Lukan sources, Mark, and Q, a document portraying Jesus as wisdom teacher and prophet (Harris 157). Luke goes a step further than John with a commandment to love not just one’s friends, but enemies as well (6:27).

From Jesus’ conception through the resurrection, each of the gospels concentrates on aspects that reinforce its impression of Jesus. Luke shares Mary receiving news from the angel Gabriel to announce she is expecting and the visitation between Mary and her cousin, Elizabeth, where unborn John leaps in anticipation of Mary’s child, Jesus (Harris 200). Unlike other gospels, Luke traces Jesus’ genealogy back to Adam rather than Abraham, symbolizing Jesus as savior for all (Harris 190). In John there is no birth story; the pre-existence of Jesus establishes his divinity and makes irrelevant Jesus’ conception (Harris 253). Also only in Luke: the boyhood story of Jesus lost in the temple (Harris 201); the depiction of John the Baptist’s parents, likened to Hebrew’s Abraham and Sarah; and John as the returned Elijah, messenger of a new covenant, “Until John, it was the Law and the prophets (16:16; Harris 191).” In John, there is no baptism of Jesus and the role of the Baptist is only to introduce Jesus as the Lamb of God and to foreshadow the importance of who Jesus is (1:6-9, 19-36). The Lukan Jesus is historical, Johannine Jesus is divine from the start.

In Luke, Jesus teaches using parables; in John, lengthy speeches (Harris 254). In Luke, Jesus is empowered by the same inspiration as Israel’s prophets—portrayed as a gentle, serving Jesus, concerned for the poor, outcast, and powerless, showing compassion, offering comfort and forgiveness (22: 24-27; Harris 193, 204). Jesus practices his commandment to “love one’s enemies” by visiting Samaritans, typically hated by Jews (9:52-56; Harris 205). In the Sermon on the Plain, the Lukan Jesus, concerned with social justice, makes real the importance of the poor and hungry; not metaphorical Beatitudes as in Matthew (Harris 202). In the story of the Good Samaritan, Jesus commands his followers “love their neighbor”. When questioned about what the Torah means by one’s neighbor, Jesus notes that one who is different from us racially or religiously, may be capable of human kindness and is our neighbor (Harris 205). One must leave all wealth and power behind to follow Luke’s Jesus (6:24). Only in Luke are the stories of the prodigal son, the lost coin, the Good Samaritan, Lazarus and the rich man shared focusing on unexpected reversals and forgiveness of wrongdoers (Harris 207). Luke focuses on Jesus’ humanity, even tempted by Satan, as a role model for others. It is with the transfiguration when his divinity is revealed (Harris 112, 212).

In Luke, Jesus embodies the compassion, mercy and unconditional forgiveness of God, so it is no surprise when Pope Francis declared 2016 the Jubilee Year of Mercy, he quotes Luke 6:36 in which Jesus tells his disciples, “Be merciful as your Father is merciful.” Pope Francis states, “we are all called to give consolation to every man and every woman of our time (Harris, Pope).

John focuses Jesus’ ministry around seven signs, or miracles. For example, one significant sign is the dialogue with Nicodemus on spiritual rebirth illuminating Jesus’ purpose as seen by John, to save the world (3:16).  Additionally, the raising of Lazarus, the most spectacular miracle, demonstrates Jesus’ power over life and death, “I am the resurrection and I am life. If a man has faith in me, even though he die, he shall come to life; and no one who is alive and has faith shall ever die” (11:25) and also foreshadows his own death and resurrection (Harris 266-67).

A distinct difference between Luke and John is the Last Supper. In Luke, a more traditional version of the Eucharist, Jesus does not refer to wine as his blood; he is never considered a sacrificial atonement for sins as other Synoptic gospels (Harris 213). In John, Jesus was already referred to as “heavenly bread”; he comes as servant instead by washing the feet of his disciples (13:3-17; Harris 268).

In Luke, Pilate testifies to Jesus’ innocence; still, he is sentenced to death. Only in Luke is Jesus the model of forgiveness, breaking the cycle of hatred and retaliation that brings evil in the world, “Father forgive them; they do not know what they are doing (Harris 214).” Confident already as eschatological judge, Jesus confirms the felon next to him will also be in paradise (Harris 271). Jesus relinquishes his spirit, “Father into your hands I commit my spirit (23:34).”

In John the crucifixion is not humiliating, Jesus alone makes the decision to give up his life (10:17-18) accepting a glorified return to heaven and the descent of the Holy Spirit. In John there are no prophecies of a second coming, rather the risen Christ is eternally present with the Holy Spirit, a “realized eschatology” where eternal life is fully available now demonstrated by Jesus’ last words, “It is accomplished”. (14:1-3, 25-26; Harris 250, 255, 275). Luke suggests Jesus is present in Christian practices after the resurrection, but John goes farther—the Paraclete as substitute for Jesus, equal with God (8:58), provides the framework for the later Trinity doctrine (Harris 276). In Luke, as Jesus triumphs over death, Mosaic law is fulfilled and a new evangelization is called for (24:36-53). The Holy Spirit, referred to fourteen times in Luke, far more than other gospels, is the initiator in Jesus’ life from conception to baptism, in the wilderness to his ministry in Galilee. The Spirit is present in prayer and at his death (Harris 193). Luke briefly mentions a second coming of Jesus, but it is considered to be unexpected and unpredictable, instead focusing on growing the community of believers (Harris 211).

Using various gospels in ministry allows a focus on the characteristics of Jesus that apply to personal situations. Not one gospel is able to fully understand who the Jesus of humanity or divinity is—language is limited, understanding is incomplete. Having four gospels written at different times, towards unique audiences, with various purposes and themes allows us to see Jesus in every new and changing ways, applicable to being Christian in daily life.