My dad, Tom Blazek, had a dream to write a book about his hometown, Valparaiso, Nebraska—to create a timeline of its history and to share stories of growing up in a small town. Passionate about history, he would devour a book on a topic he loved—about World War II, the Civil War, the history of Lincoln or Nebraska. He could find bits and pieces about Valparaiso from different sources, but he had a dream of gathering it all into one book, from the birth of the small village up to the present. His love of reading about history turned into a passion for sharing with others.

For some, his ambition to write a book came as quite a surprise. My dad wasn’t a
particularly motivated student, he is the first to admit.  One classmate said he was the least likely of their class to ever write a book.  As a teenager, any reason was a legitimate one for skipping school. One afternoon, hanging out at the town gas station with his friends, my grandma (God-rest-her-soul-for-raising-five-boys) discovered his truancy, went to the gas station, and strongly encouraged him to get back to school. Mrs. Jean Ang, my dad’s 7th and 8th-grade teacher, commented, “the Blazek boys, they had a lot of life.” God love his teachers and parents for tolerating his alternative form of education. As a teacher, it’s important for me to remember that everyone learns differently. Regardless of what he did or didn’t learn in school, he always worked hard.

I’ve observed a work ethic in my dad that is unmatched. From delivering newspapers, farming and working at a gas station as a teenager; being a manager at Safeway grocery stores, working in dispatch, sales and management in the transportation industry; and, finally, in production and office management, my dad has ALWAYS worked hard, whether he liked his job or not.  And for many years he supplemented his full-time job with hauling jobs—cleaning out attics and basements, taking trash to the landfill, and helping people move their belongings.

He had a good example of work ethic in his own grandfather, Frank Blazek, an immigrant from Czechoslovakia, who walked twenty-some miles to work on Sunday nights from Valparaiso to Gooch’s Mill in Lincoln, lived in a rented room all week, and, then walked home on Friday night to bring his paycheck home.  And his own dad, Lod, worked wherever, whenever, doing whatever he could to make some money, even if the job took him a distance from home. Work wasn’t a choice. Work wasn’t about self-fulfillment or purpose or happiness. Work was a means to an end—it was food on the table.

So when my dad finally retired, he wasted no time getting to work on his dream (and if you know my dad, you understand there is no such thing as procrastinating or wasting time—he gets things done and works fast! And if there is a free moment, he washes his car.)

Each morning, rain or shine, for three years, he drove to downtown Lincoln, found a cheap place to park for four hours and walked to the Nebraska History Museum. While reading through archives, he took copious notes by hand. He read through every edition of the town newspaper, The Valparaiso Avalanche (1878-1887), followed by every edition of The Valparaiso Visitor (1887-1945), before diving into the Wahoo newspaper, the county seat, for anything about Valparaiso from 1945 on. Over 600 hours he spent at the Nebraska History and Saunders County Museums.

After gathering a morning’s worth of information, he went home to type up his findings, adding old family and town photos and local advertisements throughout the text. And when he had questions about what he read, he tracked down people he could talk to. He interviewed dozens of people who grew up in Valparaiso, often accompanied by his brother, Don. People loved to share their stories and some even offered up old photos and newspapers that weren’t available in the archives. My Uncle Don said, “I was amazed to hear people tell their stories when asked a question about the past. One question could ignite a person’s memory, some that probably had trouble remembering what they did last week, but, man, how they enjoyed reminiscing about their youth!”

Stories are as important for those who hear them as the one doing the telling. Being listened to validates our experiences; we matter when we are heard. When we were kids, my brother and I would beg for stories about our dad’s growing up shenanigans, a window into his life before we were in it. His stories helped us see what life was like for him and helped connect us to the generations before us. But these stories are lost if not written down. Writing this book was part fact-finding and part storytelling, both his own and others.

My dad had a goal to have his book completed, printed and ready for distribution at the 2014 Valparaiso Heritage Days, an event that hundreds would attend. My dad was a town hero that day. Tom Blazek, the most unlikely person in town to write a book, had accomplished just that.

The skeptics who didn’t think he could do it or who didn’t think people would spend $25 on a book, were the same folks who couldn’t put the book down. (Pictured below on top-right is Mrs. Ang, his teacher—she still looks skeptical, doesn’t she?)

People, scattered throughout the American Legion Hall, were leafing through “My Valparaiso”, reading, laughing, reminiscing, and sharing their own stories.  It was a special day of recognition for my dad, a goal accomplished, and a dream come true. The response was overwhelming—people bought not just one copy, but two, three or more autographed copies for gifts.

Over the next weeks and months, the reaction to the book was overwhelming. People loved it, ordering more copies, calling friends in distant states and telling them about it. From all over Nebraska and the country, people called and wrote to order a book or share their stories. My dad heard from people in every region of the United States, including Arizona, California, Oregon, Utah, Nevada, Colorado, North Dakota, Iowa, Illinois, Indiana, Connecticut, Massachusetts Pennsylvania, Virginia, Georgia, Texas, and Oklahoma.

Who knew that the small town of Valparaiso had scattered its townspeople so far? Who knew “My Valparaiso”, and my dad’s work, could have such a far-reaching impact?

The conversations that followed unearthed new stories and information; a second book was born. Some, like sweet old Edna Johnson, who enjoyed the first book so much, pre-ordered “My Valparaiso II” before it was even finished, but, sadly, didn’t live long enough to see it published. Another lady, in her eighties, said she read things about her family that she had never heard before.

“My Valparaiso” and “My Valparaiso II” are chock full of events and anecdotes that warm the heart and keep the history of the town alive—everything from tornados, fires and blizzards; to the first automobile, electric lights, and pool halls; to horse and buggy accidents, train wrecks, burglaries and even suspected murder; difficult times during the Great Depression, illnesses like hog cholera and scarlet fever; and festivities including Fourth of July celebrations, the traveling circus, auctions and church gatherings. You’ll also find a list of every person from Valparaiso who served in World War II, every graduate from Valparaiso High School and every business ever established, along with photos and advertisements that span the years.

A topic of great concern for many years was alcohol—would the town be dry or not? In 1908, apparently “German and Bohemian immigrants brought with them the thirst for beer.” But Valparaiso was a dry town, off and on, for several years. The town newspaper reported in 1909, “If Valparaiso goes dry again next spring, the Visitor will be for sale. We, the editor, must simply have an occasional nip in order to ward off despondency and keep up a business appearance.” In 1912, fifty drunks were caught celebrating the 4th of July, and concerned wife, Lillie McMaster, took out an ad in the paper saying, “I hereby forbid any person or persons to give or sell my husband any kind of liquor. This applies to the saloon keepers of Valparaiso and Touhy.”

One of my favorite stories that my dad told, included in the first book, is the time he blew up his dad’s car. Yup, he blew up his dad’s car. My dad and a few of his friends had a plan to drive into Lincoln and “cruise through Kings on O Street”, a popular past-time in 1962. The first attempt, after some likely reckless driving, resulted in the “knocked-out rear end of the car.” They needed different transportation and my dad had a bright idea: “My folks, along with another couple, were in Lincoln… my brothers and I were told not to touch the car. Knowing my Dad always checked the speedometer, I unhooked it.” But then they needed gas. (You can see where this is heading.) Siphoning gas from one vehicle to another was the second bright idea: “We had a pretty big stream of gas running between the two cars when Richard Draper lit his cigarette and accidently dropped it causing the gas to go up in flames…and burning the whole back end of the car. Needless to say, when my folks got home I was in big trouble.”

My dad is a lively storyteller (he has pretty good material) and is an attentive listener. What a gift Tom Blazek gave to those he listened to and to the folks who learned something new about their relatives because of his books. What a gift it was to tell the stories that otherwise would have been lost and for the childhood memories that were stirred. What a legacy that will live on because of my dad’s dream and hard work!

And yes, there will be another book. My dad says, “I may not live long enough to do Book 3 but people keep sending me stuff.”  He’s also been asked to write a book about Touhy, the town a few miles north of Valparaiso. He thinks he’ll have that one published in about a year.

This, among many other things, is what I’ve learned from my dad: Where we come from is important, but even more so is what we leave behind.
“If you want to change the world, pick up your pen and write.” -Martin Luther 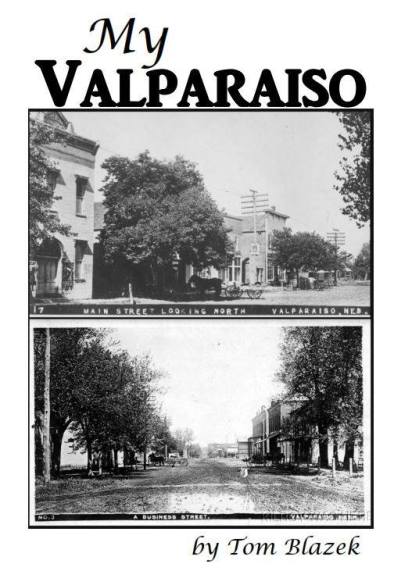 2 thoughts on “You are never too old to set another goal, or to dream a new dream.”