Phase one—Selling Our House: Surrender to Surprise!—was the decision to sell our house without knowing where we might move, trusting that our leap of faith would be an interesting exercise of self-awareness and surrender.

Phase two—Decluttering: Taking Off The Top Layer—was eye-opening. After a few weeks of the decluttering process—making decisions about what to throw, keep, donate or save—it became apparent that the last nine years had been ACCUMULATING years. I realized we had far more stuff than I thought.

Just put it in the basement     If we were paid a dollar for every time one of us said, “Put it in the basement”, we could pay our next month’s rent. Whether it was an old toy, unused sporting equipment, outgrown clothes, a bag of free goodies from a home and garden show (seriously, we found a bag of magnets, business cards, jar openers, key chains and a calendar that was dated 2008), or anything we didn’t know what to do with, we chose NOT to deal with it. We stored it. We put it in the basement. And the basement was the part of the house we kept steering away from. It was daunting to think about going through drawers and closets and boxes.  We had existed in “out of sight, out of mind” mode for so long (not in a hoarding sort of way, but in a we-have-lots-of-responsibilities-going-to-work-and-raising-a-kid-enjoying-life sort of way.)

Kids comes with a lot of stuff     I am not a shopper. I am not a collector. But still there is so much stuff. The past 9 years were Jessica’s middle and high school years and with that came an accumulation of sports equipment, t-shirts with logos for every camp, dance or sporting activity she attended, awards, medals and trophies, books, photos, precious keepsakes and loads of other once-thought-of-fondly crap.

The years flew by and now, approaching Jessica’s 21st birthday, I am going through baby dresses, Barbie dolls and craft supplies. We’ve been able to pass along a lot of it to my cousins with babies (and I am delighted to see some of the things be put to use) and some things we kept for children who might visit us and some things we kept just ‘cuz. Jessica has been a huge part of this process too—helping to decide what childhood toys and mementos she would like to keep.

Attachments beyond the stuff     The decision to move challenged other attachments, not necessarily to things, but to “the 68506”. We have lived in the 68506 zip code since we were married 30 years ago (minus 6 months as a newlywed in a very cheap apartment just over the 68506 border). We lived in the same apartment for five years, at our “starter house” for 15 years and then at our most recent house for 9 years—all within a mile of each other.  I had lived close to school, within walking distance, for all of the 17 years I have been a teacher at Lincoln Southeast. 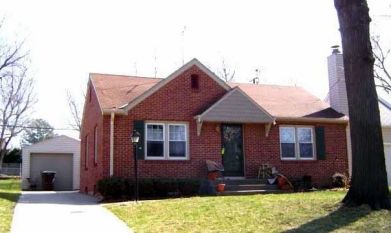 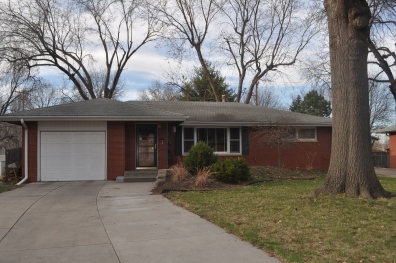 Whenever Joe had brought up moving outside of the 68506, I just wouldn’t consider it. Our house was very affordable (why spend more money?) and close to school (why move farther away?) and in familiar territory (why go outside of our comfort zone?). I was close to my school, my stores, our parents, my cousin. Change can be hard, so why volunteer for it?

It was only when we decided to LET GO of where we lived, that I was open to possibilities that I would have never considered before.

I’m grateful that we decided to sell our house BEFORE we decided where we would live next. It feels like we really did surrender to surprise. And no one could be more surprised than me.

Giving up to gain     Giving something up leaves space for something new and exciting to come in. I recently went to a retreat at St. Benedict Center with the name, Giving Up to Gain, and with practice I am learning it is so true. When we give up our agenda, God has something even greater in store for us. It was only in giving up what we had, to entertain possibilities, that we are able to gain so much more. We are building a townhouse that will be on the outskirts of south Lincoln in a neighborhood that we actually considered a few years ago, but I said NO…it was too far away. Now it feels just perfect.

The decluttering/downsizing process was, and is, daunting….and I may just have given up on it if we hadn’t committed to selling the house and started packing things away. But taking that first step has made all of the other steps do-able and possible… and it has allowed me to be more aware and present with what is going on in my mind, heart and spirit.

Phase 3—Beyond “the 68506” and Phase 4—What is essential? will be in my next blog post. In the meantime, the lessons learned from Phase 1 and 2 will sit with me for a while. I will continue to consider what I can give up that will ultimately bring gain, not just materially but spiritually, psychologically and emotionally; not just for my own life, but for those close to me and the community-at-large; not just for now, but for eternity.

7 thoughts on “Giving Up to Gain: Selling, Decluttering and the 68506”